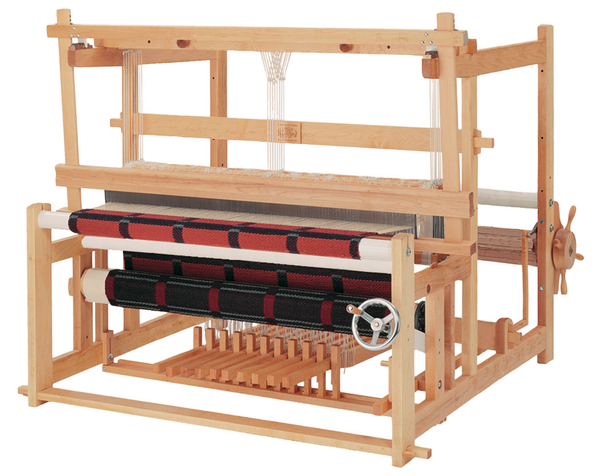 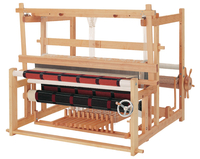 Schacht has temporarily put manufacture of these items on hold. You are welcome to place an order, but we won’t be able to restock until this fall.

The Cranbrook Loom is widely considered to be the finest Countermarche loom available today. This Scandinavian-style loom has mortise-and-tenon construction, powder-coated breast and rear beams, treadle locks, and a fully adjustable overhead beater. A countermarche loom is a balanced system of rising and sinking shafts. There are two sets of lamms, an upper suspended lamm and a lower pivoting lamm. Each shaft works independently, its operation not affecting that of the other shafts. The tie-up system of the Cranbrook employs a special-size Texsolv nylon loop cord that remains permanently installed on the treadles and may be tied to either the upper or lower lamm.

The front, rear, and knee beams of powder-coated tubular steel give the loom added rigidity while affording better protection for the warp. The solid octagonal warp and cloth beams are 16 1/2" in circumference. The Cranbrook can be expanded from four to six or eight shafts at any time. The locking treadles are especially helpful for rug and tapestry weaving. Solid bronze ratchet gears, pawls, and beater hanger racks are featured on all Cranbrook Looms. The warp beam ratchet gear is released by a foot pedal.

The more we get to know this loom, the more we appreciate the Cranbrook's unique design and the advantages of countermarche weaving. There's a reason it's been called the Cadillac of looms. Our upgrades make it even better. We have extended the frame of the loom to increase the loom depth by 18". This not only makes treadling easier when using high tension, it allows more room inside the frame to maneuver for threading and treadle tie-up.

Because of the extra room inside the frame, we designed a sliding threading bench which makes treadle tie-up much more comfortable! We've added a 12 treadle option to all new Cranbrook looms--Great news for summer and winter weavers. ", increasing the overall height of the loom accordingly. The bench has been modified to have either a slanted or flat bench top. The knee beam is now a steel beam.