A reed is designed to keep your warp threads consistently at a particular width apart. We measure reads by their 'dent,' or Ends Per Inch (EPI). An 8 dent reed has eight spaces (called a dent) for yarn per inch. On a rigid heddle reed, every other one of these spaces is a slot, and the other is a hole. The spacing of the warp yarn is called the sett, and determines how the final fabric feels based on how thick your yarns are and what you're weaving. Getting the "proper" sett for the exact combination of warp yarn, weft yarn, weave structure, and beat to match the finished fabric that you are intending can seem daunting. There are MANY sett charts available online (our favorite is the Master Yarn Chart from Handwoven) that are a great starting point for deciding which reed to use for a particular project.

What happens if you NEED a sett that falls somewhere between one of these common sizes, or doesn't match the reed(s) that you have? Through the magic of MATH, you can get many different setts from a single reed by skipping dents or placing multiple warp yarns through the same dent. You can already see how this might work if you had a 10 dent reed and placed two yarns in each dent you would end up with 20 warp ends per inch, or if you used only one warp end for every other dent, you would get 5 ends per inch. You can extend this (although the math gets a little trickier) and only double every other dent getting you 15 epi. Typically, a reed substitution chart will denote the required threading sequence with numbers separated by dashes. The 15 epi from a 10 dent reed example above would be written as 1-2 showing that you thread 1 warp end through a dent then two through the next, and repeat. Below is a simple reed substitution chart, there are many more available online. (Download as a PDF for printing) 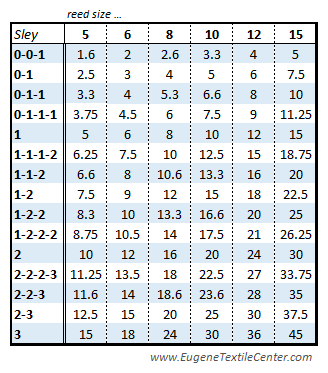 Look up the size of reed that you HAVE on the top row, then travel down to the sett you desire, then follow that line off to the left to find the proper sleying sequence to achieve that sett. Keep in mind that you CAN get 5 ends per inch out of a 15 dent reed, but bulky yarn will NOT fit through the tiny dents and you would likely be better off getting another reed with larger spaces instead. 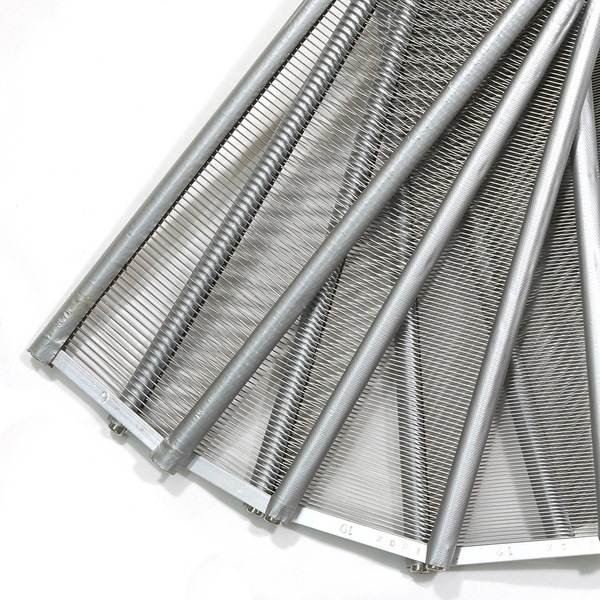 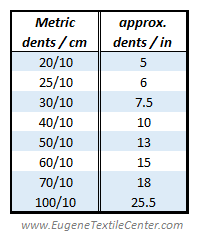