Indigo dye can be prepared from many different plant species found around the world. The oldest example of indigo dyed yarn comes from Peru (no surprise there!) from six thousand years ago! Other early examples are from Egypt (4400 years ago), and China (3000 years ago).

The most prolific producer of indigo dye in the ancient times was India. In fact, the name indigo comes to us from the Greek word indikón which is both their word for Indian and the indigo dye. Blue dye-plants weren't limited to the tropics (where "true indigo" grows). Japanese Indigo grows in more temperate climates (like Oregon!), and Woad is native to the steppes of Asia and has been spread to Europe.

Plants aren't the only source of blue dye. Certain mollusks found in the Mediterranean secrete a substance that contain mixtures of indigo (blue), mono-bromoindigo (purple), and di-bromoindigo (red). The earliest evidence for the use of these mollusks for dye comes from Crete. They developed a method of extracting the dye (it involved smashing, fermenting in an alkaline solution, and cooking for over a week). The Phoenicians later improved on the methods and become famous for their Phoenician Red and Tyrian Purple. If the dyed material is exposed to ultraviolet light while curing, the di-bromoindigo converts to indigo, resulting in a pure blue rather than a purple color. Some scholars believe this is the elusive source of tekhelet, or the blue traditionally found on Jewish religious garments (and represented on the flag of Israel). 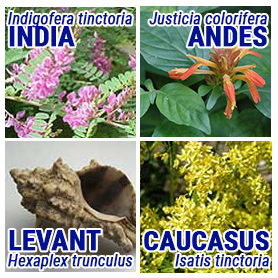 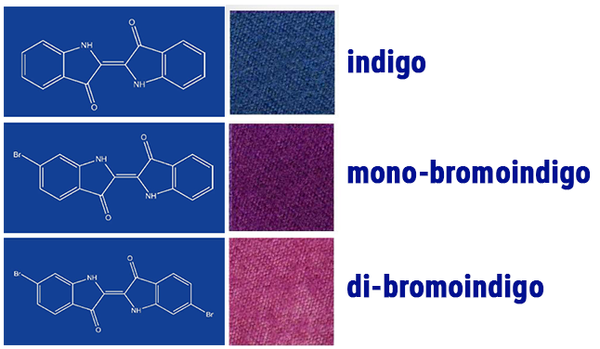