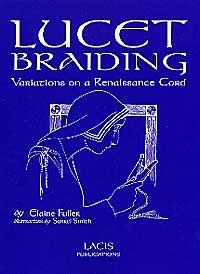 Lucet Braiding
Variations on a Renaissance Cord
By Elaine Fuller

The lucet is a simple tool used for making cords and drawstrings. The earliest lucet yet recovered dates to the Viking era, and this little implement was in common use in Europe from at least the 16th century until the advent of cheap, machine-made cords in the 1830's. The lucet experienced a brief revival in the mid- 19th c., and again in the Edwardian era. Lucets were made of a variety of materials:  bone, wood, and horn for the humbler workbasket, with fancier tools shaped from ivory, tortoise-shell or mother-of-pearl. Some of the finest surviving examples have metal inlays. Steel inlays were particularly favored in the final years of the 18th c., reflecting the late Georgian fashion for steel-thread embroidery on costume.

Nearly any strong, even thread or yarn can be used for lucet cord. More fragile threads, such as softly twisted wool, chenille, or silk floss, can be used as a gimp thread, as can ribbons and metallics. Number 3 pearl cotton, bedspread weight crochet cotton, or even heavy string are good for the first practice sessions. If no specific thread is mentioned in the instructions, use one of these three. Later cords can be worked in finer threads. Early 19th c. workers appear to have favored silk for their cords.

The basic lucet cord uses a single thread to make a square braid. As you go through the techniques in this book, you will find unlimited possibilities as the basic cord evolves into multicolor braids, beaded trims, and picot edgings for the finest costume.

The cords in this book are arranged in increasing order of difficulty. It is important to work through the patterns in the order presented, as information given early on may not be repeated later.